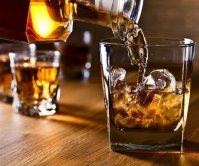 To quote the famous Mark Twain, who once claimed, “Too much of anything is bad, but too much good whiskey is barely enough” so do many think similarly of golf. In fact, it has been said, and often attempted to be confirmed, that it takes eighteen shots to finish off a fifth of Scotch and thus, why the Scottish invented the game to cover eighteen holes. Any more to a round of golf and a golfer would have to play dry over the last few holes.

While that specific connection may or may not be true, it is true that Scotch and golf have gone together as long as the game, and possibly as long as the drink, have been around. But Scotch is just one form of whiskey and it takes a discerning golfer, or reader, to understand and appreciate the world of whiskeys.

Scotch Whisky, Irish Whiskey, American Whiskey, Canadian Whiskey, Single Malts, Blends – they all can be more intimidating than which new driver to buy. To that end, we at KC Golfer Magazine decided to help you out. We have sampled a lot of the Whiskey world – and while that sampling went well beyond our fair share over the years, our thirst (pun intended) for more knowledge about our favored flavors led us to perform a bit of research. That’s how we landed ourselves at Paddy O’Quigley’s Pub & Grille in Leawood (also – one of our editors is a co-owner of Paddy’s). It should be noted that Paddy’s prides itself as having American Bourbons, Single Malt Scotch Whisky’s and the best selection of Irish Whiskey’s allowed in the State of Kansas. With the aid of that fine establishment’s owners and bartenders, and with the assist of some of their suppliers/distributors, we crafted this short guide through the world of whiskeys.

Briefly, all whiskey is distilled from a fermented grain mash. Malt whiskey is made only from malted barley, while grain whiskey is made from malted barley along with other grains. You might have heard of single malt whiskey. It is malt whiskey from a single distillery. Meanwhile, what is known as vatted malt contains malt whiskeys from different distilleries. Finally, blended whiskeys contain a mix of malt and grain whiskeys, often from different distilleries. Which one is better is for the taster to decide. Some feel a single malt is more “pure”, while fans of blended whiskeys point out that a good one combines the best whiskeys from the best distilleries to create a superior flavor. 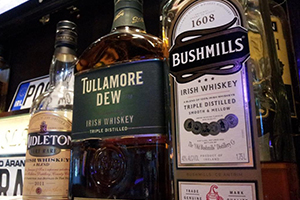 Both Scotch Whisky (spelled without the “e”) and Irish Whiskey (with the “e”) come in single malt and blended. Perhaps the most notable flavor difference comes from how the Irish dry their malted barley. It is dried in kilns rather than the Scotch method of using peat fires to instill the smokey flavor of many popular Scotches. The Irish say this lets the natural flavor and depth of the whiskey come through without the added smoke which can overshadow some of its subtleties. And Irish Whiskey uses a blend of malted and unmalted barley, while the Scotch use exclusively malted barley. Many Scotch afficianados enjoy peaty Scotches – the peatier, the better in their estimation. The best way to describe a peaty Scotch is “smokey” tasting, as described above – almost like having a mild cigar.

Another distinction: Irish whiskey tends to be higher in alcohol content – which many say only enhances its medicinal qualities. The reason for this is Irish whiskey is usually triple distilled to increase the purity and smoothness of the spirit. Each turn through the still makes the finished product more refined and of a higher quality, while also increasing its strength. 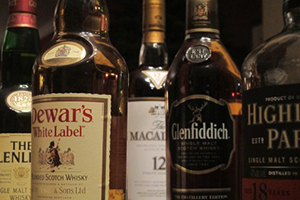 Dewar’s is a well-known blended scotch and a very popular single malt, the Macallan, are good places to start a journey into Scotches for the uninitiated. Other beloved single malt Scotches include Balvenie, Glenfiddich, Oban, Glenmorangie. A good Irish whiskey that is fairly common is Jameson’s. It is made from a mash of malted and unmalted barley. It’s often listed alongside Bushmill’s, another favored Irish whiskey. It’s been said that Jameson is preferred by Catholics and Bushmill’s is a Protestant potable. From there, many will try Tullamore DEW and graduate up to the very good, very smooth, very expensive Midleton. Whatever the case, we think it best to take the high road and enjoy them both. From there you can jump off into other Scotches and Irish Whiskeys – a good bartender can help you find your way around.

On this side of the big pond we have our own American and Canadian whiskeys. Bourbon whiskey is one American version that is distilled from a mash that is at least 51% corn. The name is reported to have been derived from Bourbon County in Kentucky where early recipes and distilling processes were developed. Makers Mark is an excellent example of a good bourbon whiskey and one we suggest trying. The famous Jim Beam is one other. For a little more in terms of price, some other Kentucky favorites are Knob Creek or Elmer T. Lee, while Blanton’s and Booker’s are even better, for just slightly more of your wallet. 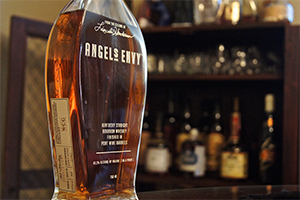 Perhaps our top favorite these days is Angel’s Envy – a relative newcomer available in Kansas and Missouri since about late 2014. Of course, on every bourbon-lover’s list is Pappy Van Winkle – a fairly rare, exceedingly expensive bourbon.

Rye whiskey, on the other hand, is another American style and is distilled from a mash that is at least 51% rye, giving it less of a sweeter taste than bourbon generally. While fairly rare just a few years ago, today it is quite easy to find a decent selection at your local liquor store or pub. Jim Beam, Wild Turkey, Makers Mark and other big bourbon producers also make a rye whiskey. Some other ryes that are pretty common include Bulleit, Old Overholt, Woodford Reserve, and the aforementioned Angel’s Envy has a fairly pricey rye themselves as well.

It’s worth noting that Jack Daniels is neither a bourbon or a rye. Rather, it is a Tennessee whiskey which is much the same as bourbon, except it has been filtered through sugar maple charcoal, giving it a unique flavor. Many say that is what makes Jack Daniels such a treat.

Finally – what about our neighbors to the North and their whiskey? Canadian whiskeys often get their smoothness from malted rye, although they tend to be less strict on what other grains and how much of those grains make up the ingredients list. Almost all drinkers of spirits are familiar with Canadian Club or the more expensive Crown Royal. The biggest impact on us Americans that ever came from Canadian whiskey was during Prohibition. Bootleggers found it convenient to get their whiskey in Canada and run it across the border by truck or by boat into the US. Hiram Walker’s is one such distillery that, due to its proximity to Detroit, ended up doing a fair amount of business with “exporters” back in those days. 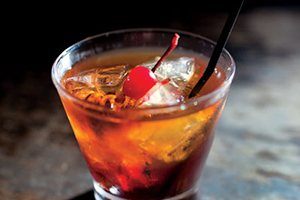 Of course, whiskey doesn’t need to be enjoyed only by itself. Many enjoy their whiskey served in a variety of ways – often with other flavors and mixes. Popular whiskey drinks include the Manhattan, Old Fashioned, and many others.

An Old-Fashioned is served over rocks or shaken and strained over a single, large ice cube. It is made up of whiskey (rye is very common, but bourbon is often used as well), some simple syrup (basically sugar water), and a dash or two of bitters. An orange or lemon twist is the garnish of choice. Some will add a cherry too.

A Mint Julep, for you Derby fans, is pretty similar. It has bourbon and simple syrup as well, but the glass is first prepared with muddled mint leaves and served with crushed ice. The garnish is usually a sprig of fresh mint leaves.

The Manhattan is made with whiskey (the type depends upon your taste: rye, bourbon, or Canadian whiskey), a little sweet vermouth, a dash of bitters and a garnish of a maraschino cherry. Most are served chilled and strained into a wide-rimmed, stemmed glass.

A Rob Roy is the same as a Manhattan, but with Scotch, while a Bobby Burns is a Rob Roy with a touch of Drambuie rather than the bitters. All of these drinks are stirred (or shaken) with ice, then strained and served straight up. When you are mixing them yourself, experiment with the whiskey-to-vermouth ratio to see how you like it best.

Perhaps the most popular Irish Whiskey cocktail might be the GinJa at Paddy O’Quigley’s, although we are sure there are others. But since most folks like their Irish whiskey neat, straight up, or on the rocks, there really aren’t many. The GinJa’s name is just a mash-up of the two main ingredients: Ginger Ale and Jameson. It’s a great summer cocktail when served on the rocks with a lime garnish. 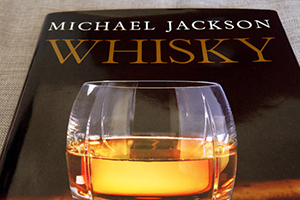 Anyone who has had their whistle whetted by this blend of information about whiskey can certainly learn more. Simply pick up Whiskey: The Definitive World Guide By Michael Jackson and Dave Broom (Dk Pub, 2005). This has everything you will want to know about whiskey, including its history and how to pair it with food.

But, only the true whiskey die-hards need a book, our advice to you is the same you’ll find in any magazine article on wine, food or spirits: don’t take anyone’s word for it, go out and try the diverse world of whiskey for yourself. There are many Scotch and bourbon tastings occurring across the country where you can sample a wide variety of whiskey. The last bit of advice – if you do try to prove the old adage about shots of whiskey in a bottle matching the number of holes on a golf course, do so with at least a couple of friends to share it with. It will be more fun, and there’s a better chance you’ll make it back to the clubhouse.

Finally, as we opened with a quote, we’ll leave you with a few of our favorite whiskey quotes.

British Prime Minister Winston Churchill: “The water was not fit to drink. To make it palatable, we had to add whisky. By diligent effort, I learned to like it.”

Late Night Show host Johnny Carson: “Happiness is having a rare steak, a bottle of whisky, and a dog to eat the rare steak.”

Movie Star Errol Flynn: “I like my whisky old and my women young.”

Comedian W.C. Fields: “Always carry a flagon of whiskey in case of snakebite and furthermore always carry a small snake.”