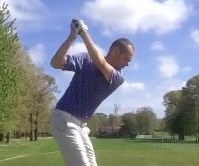 The golf swing is dependent on correctly doing the previous move. Therefore, a solid takeaway promotes setting the club correctly at the top of the backswing, which in turn promotes returning toward impact with the club on the correct plane, path and face angle. 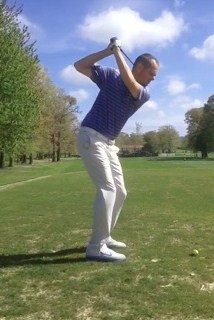 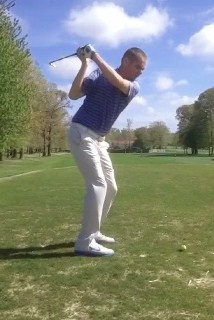 From a laid off position the hands must rotate quickly through impact. Shanks often result when the hands do not rotate quickly enough. A shank results when the hosel of the club head strikes the ball causing it to squirt off to the right. Additionally, players often pull the shot causing the ball to start to the left of the target.

The following tips are designed to get the club set in the proper position at the top of the backswing.

The proper take away also helps position the club correctly at the top of the backswing. A flat and inside take away can lead to a laid off backswing. Try to avoid the club head getting behind the hands during the takeaway. Place an object such as a head cover about a foot behind the ball positioned just inside the target line. Take the club head back low to the ground without touching the object behind the ball. Also, avoid the object on the downswing. This drill will help swing the club on a vertical swing plane, rather than a horizontal swing plane. In addition, it will help position the club correctly at the top of your backswing instead of pointed across the line or laid off to the target line. Be sure the club points to your target at the top of your backswing. Practice with a friend standing behind your or in front of a full length mirror to check for the correct position.

Matt Keller is a PGA Golf Professional with over 15 years of experience. Matt is a graduate of the Penn State PGM Program. Throughout his career he has worked at courses in Pennsylvania, Maryland, Florida and Delaware. Matt has conducted thousands of golf lessons to players of all ages and ability levels. Currently, he is a PGA Professional at Cripple Creek Golf and Country Club located near Bethany Beach, DE.