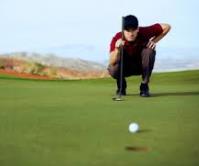 Every golfer faces several difficult putts throughout a round of golf. Your goal should be to hole the ball in two putts or less every time. If you routinely make three putts or more there is a significant amount of room for improvement. For example, let’s say you average two putts on nine greens and three putts on the other nine greens. There is a quick five stroke improvement by cutting down from nine three putt greens to four three putt greens in your round.

Set Up and Stroke

The putting stroke, similar to the golf swing, is an athletic movement. Therefore, begin with an athletic set up and continue with the correct fundamentals. Start with your feet approximately shoulder width and bend your knees slightly. Lean forward at your waist to create the proper spine angle. Allow your arms and shoulders to create a triangle at address. The arms should hang down below the shoulders while your eyes are positioned directly over the golf ball. The golf ball should be in the middle to slightly forward in your stance. Position both of your thumbs so point down the flat part of the grip. Gripping the club correctly will help keep the putter square through impact. 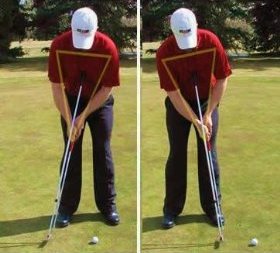 After you achieve the correct set up, allow your arms and shoulders to create a rocking movement, known as a pendulum motion. During the backswing, the left shoulder will move down while the right shoulder moves up. Consequently, the forward swing will push left shoulder back up while the right shoulder returns to a lower position. Keep the putter low to the ground during the backswing and follow through. The lower body should remain completely still throughout the stroke. Focus on keeping your eyes fixed down on the ball and accelerate through impact. Finally, avoid taking a big backswing and short forward swing. Decelerating is one of the most common mistakes in any golf shot. 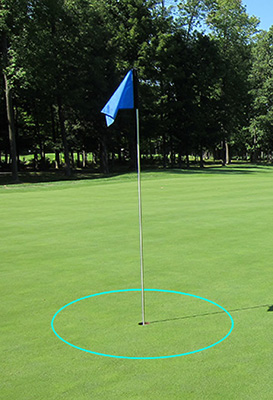 Based on the previous statistics, focus on getting the ball closer to the hole. When facing challenging putts always try to give yourself an opportunity to make the next putt. Imagine a circle around the hole approximately 3 feet in diameter. As you know, percentages of making a shorter putt are much higher than holing a longer putt. Practice lagging the putt close to the hole from longer distance. A good lag putt positions the player to have a simple putt on the next stroke. The lag putt typically stops short of the hole.

I routinely practice two drills to keep my putting stroke and feel sharp. To learn the correct distance, practice a ladder drill. Begin by placing markers such as tees on the green in increments of ten feet. Practice hitting putts to the different lengths. It is great if you make long putts, however, the goal is to master different distances so you have more putts inside a three foot radius. 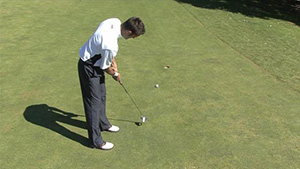 The clock drill improves focus and confidence for putts inside ten feet from the hole. Begin by placing three balls in a line at three, six and nine feet from the hole in four directions around the hole, similar to the twelve, three, six and nine positions on a clock. The goal is to make all twelve in a row. If you miss any putt, then you go back to the beginning and start over. While it is extremely difficult to make all twelve putts, you essentially reinforce your ability to make the shorter putts.