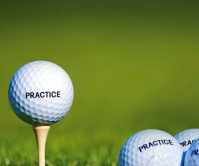 Early extension in the golf swing occurs when the lower body moves toward the golf ball during the downswing. Early extension causes the arms and club to get stuck behind the body during the downswing and causes the upper body to rise up through the hitting zone. The body essentially gets in the way of the hands and arms through impact. Therefore, players that create this loss of posture during the downswing typically create misses that consist of blocks, pulls and hooks. In other words, the ball can go in just about any direction depending on your timing, but rarely straight. Some call this the two way miss.

Professional players create power from the ground up while amateurs often create power from the top down. The correct pelvic movements will translate to longer, straighter shots. Early extension is the result of a swing fault or physical limitation. Drills can help correct swing faults while exercise and stretches are often required to correct physical limitations. The inability to perform a deep squat or hip bend can lead to early extension. Muscle imbalances in the glutes or abdominal areas often lead to the lower body thrusting forward during the downswing.

Begin by standing straight up, extending your arms out with your thumbs up in the air. Next, place your thumbs back on your shoulders so your elbows point in front of you. Make sure your toes are hip-width apart and point straight in front of you. Keeping both heels on the ground, begin to squat as far down as you can go. A full squat allows the thighs to go past parallel with the ground and your butt should be below your knees. Full mobility allows you to go all the way down and return back to your starting position. If you can’t complete the squat, the lack of mobility and stability in your body is potentially causing you to early extend in your downswing.

Adam Scott makes the correct rotational movement with his pelvis throughout the swing. The yellow line remains against his backside from setup through impact.

This drill is great to work on maintaining posture, creating an effective shoulder plane and developing the correct pelvic movement during the downswing. You can use any club for this drill. Begin by taking your stance and cross your arms with each hand on your opposite shoulder. Place the grip of the club in your left hand a few inches below your collar bone while holding the club in place with your hands crossing your chest. The end of the club should point the opposite direction of your target. Initiate a swing by turning your upper body that simulates a backswing. Your shoulder should point on the other side of the ball and target line while the end of the club points down toward the ball. Next, rotate your lead hip while your upper body returns back toward the ball.

The extended club should point toward the ball while your upper body maintains its spine angle. The lead hip should be in an open position and rotating, but not thrusting toward the ball. The downswing simulation should help feel the correct pelvic rotation and not thrust. Combine the Alignment Stick drill with the Sweep drill for quicker results. Eliminating early extension is a complicated problem. With practice, you will learn the correct pelvic movement and eliminate those two-way misses.

Matt Keller is a PGA Golf Professional with over 15 years of experience. Matt is a graduate of the Penn State PGM Program. Throughout his career he has worked at courses in Pennsylvania, Maryland, Florida and Delaware. Matt has conducted thousands of golf lessons to players of all ages and ability levels. Currently, he is a PGA Professional at Cripple Creek Golf and Country Club located near Bethany Beach, DE.