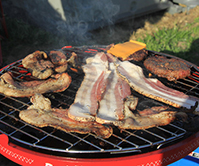 What’s the difference between a picnic and a tailgate party?

This question was put to me by Joe Cahn. If you don’t know, and probably you don’t, Cahn is the official Commissioner of Tailgating. Or as he prefers to be called, The Commish.

It’s a position he’s held with honor since 1996, when he gave himself the title. Right after selling his cooking school in New Orleans and taking to the open road to promote and partake in what he calls, “the last great neighborhood of the American social.” Or what you and I call tailgate parties.

Each year, Cahn says, he visits tailgate parties at 28 professional football games and 14 college games, as well as various other events such as NASCAR races, hockey games, even steeple chase races and polo matches. The Commish estimates that since the mid-1990s he’s logged more than 800,000 miles road-tripping to more than 800 tailgate parties around the country.

In fact, Cahn and I are talking over the phone as he drives home after a July weekend spent tailgating at the College Football Hall of Fame induction ceremonies in South Bend, Ind. (“Passed over again,” The Commish jokes. “Can’t understand why either. No steroids here, no scandal. Just a barbeque pit.”)

If anyone knows the difference between a Sunday picnic in the park and a Sunday tailgate party in the parking lot, it’s Cahn. But I’ll have to wait for the answer to his philosophical conundrum.

In the middle of our conversation, Cahn is waved over by a fellow highway driver and informed that his grill fell off his vehicle somewhere back down the interstate. Understandably we postpone our call until the following morning so that The Commish can backtrack to rescue his runaway grill. 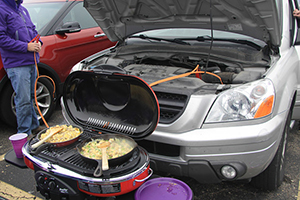 In the time between our calls, I become increasingly intrigued by Cahn’s question about the distinction between picnics and tailgate parties. What at first seems a simple question turns over and over in my mind until it reveals itself to have all the complexity and mystery of a stubborn shoelace knot—not that big of a deal but still something you must solve.

Think about it. Picnics and tailgate parties share many similarities. A congregation of friends. Maybe even a few family members you can stand for short periods. Consuming beverages and food, often grilled, in the great outdoors. Playing mildly challenging games to pass the time.

The day after losing his grill, Cahn is speaking to me over the telephone from his home in the Dallas-Fort Worth area. When asked about his AWOL grill Cahn sighs, says that’s a long story. And most likely one with a sad ending because he doesn’t tell it. Instead Cahn finally solves the picnic/tailgate riddle for me.

“This difference,” Cahn says, “is having an adversary.”

Turns out the magic ingredient that transforms a picnic into a tailgate party is a generous dash of seasoning labeled “Us vs. Them.” Though to really kick it up a notch, I recommend using “Us vs. Them SOBs.”

So long as you have a common enemy, Cahn says, you have a tailgate party rather than a picnic. But just as there are circles in skee ball and Dante’s Hell, so too are there various levels of intensity in the world of tailgating.

NASCAR? Too many adversaries. Your team is just one versus 32 others.

Baseball or Hockey? Us vs. Them yes, but diluted with too many games.

Golf? No assigned seating. Everyone hustles out of the parking lot and onto the course in a land-grab race to claim their patch of ground as early as possible. Besides, “Get in the hole!” is the most aggressive thing anybody shouts at a golf tournament.

Concert? No common enemy so that’s really nothing more than getting lit up in the parking lot before stumbling inside to hear death metal, country, a men’s a cappella chorus or Jimmy Buffet.

Based on his not inconsiderable experience, The Commish maintains that the true, concentrated, Us-vs.-Them event is football. 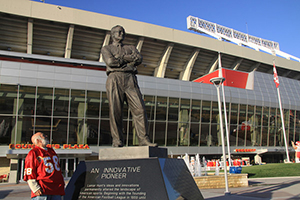 That, friends, is the math of a good time. And Kansas City get’s an A+. It is The Commish’s judgment that Kansas City (as well as the home towns of Jayhawks, Wildcats and Tigers) is always among the top two or three tailgating experiences in the country. In particular, he says, KC is known for its fantastic array of grills.

Okay, you have another team to hate on. But what does it take to make a great tailgate party?

Luckily, like all brilliant ideas, the tailgate party is built on a few basic elements that are scalable to fit a range of attitudes, incomes, races, religions, creeds, colors and parking lot spaces.

The party starts in the bedroom. The closet, to be precise.

Wear your colors, Cahn says. You’re not going to church. You’re not going to work. It’s a tailgate party, so be sure to show the world what team you live and die by. And if somehow you’ve managed to preserve a pair of those delightfully awful Zubaz pants striped in Chiefs colors, for Nick Lowery’s sake man, break them out!

While an adversary is vital to a tailgating, it’s not the most important ingredient of the festivities.

“The people make the tailgate party,” Cahn says, “It’s having friends around you.”

Old friends make a good tailgate, as do the new ones you’ll meet as they wander over to your tailgate party. So Cahn says it’s important do as much prep work and pre-cooking ahead of time at home. That way you spend less time at the grill and more time with the people at your party.

As for what to serve, grilled meats reign supreme at tailgate parties, as they should. But Cahn suggests offering a variety of foods, including healthy alternatives such as power bars and certain functional types of fruits.

“You drop a banana or an orange on the pavement, you can still peel it and eat it,” he says.

Also, don’t be afraid to be daring with your menu. Keeping it simple by offering finger foods doesn’t have to limit your menu to the bland or the common.

A few examples: give a creative twist to your dips (use black beans, crème fraische, etc.), deviled eggs (infuse the filling with different flavors such as truffle oil or anchovy paste), or bratwurst (simmer in beer, serve with sauerkraut).

Finally, be sure to bring trash bags and containers for garbage, recyclables and spent coals, though Cahn gives Kansas City points because Arrowhead provides bins for all three.

Booze is key, we all know that. Which adult beverages you choose to serve are a matter of taste, style and wallet. Conveniently, the same rules for food also apply to the drinks: keep it simple but don’t be afraid to give them a creative twist. 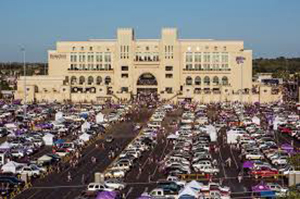 Cahn warns against cross contaminating food and drinks and suggests using separate coolers for each. Also be sure to offer water and soft drinks for any friends of yours who might bring along their children, designated driver or AA sponsor.

Okay, back to the booze. If you’re truly serious about your mixology, you might consider investing in a gas-powered blender. You can order one online for $300 plus shipping. Weighing about ten pounds, it’s powered by a 24cc, 2-1/4 horse power Poulan 2-stroke engine with variable RPM, throttle and speed capacity.

According to the web site mytailgate.com, the blender’s stainless steel blades are driven by a steel shaft supported with sealed ball bearing construction. It has front-mounted primer, choke and kill switch for easy access. It boasts a 0°-chill in 15 seconds and, with a 60 oz. pitcher capacity, gets about 6,500 MPG (margaritas per gallon).

There are varying schools of thought on tailgate party games. Some people are into them, finding them a way to generate fun and conversation, simply passing time until the main event. Others are not into games, and would rather just socialize. Either way, no problem.

The problem? There’s always one or two bozos way too into the inane game. Whether it’s a drinking game, a game that involves tossing something across a parking lot without hitting someone in the noggin or even just a raffle, the mixture of aggression, booze and competition always tends to overcome the odd, soft-brained tailgater. Always.

So please, for the sake of the grownups who know how to handle their booze, please remember that the game in the parking lot is not the point of it all.

The point, of course, is to socialize, and not just with people you already know. Take a little time to stroll around, checking out other tailgate parties, meeting new people, seeing how they instill their creativity into the tailgating experience.

Cahn tells a story from a few years back about a woman with a notebook meandering from tailgate party to tailgate party around the Meadowlands parking lot. Cahn asked her if she was a Giants fan. “Oh, I hate football,” the woman responded, “but this is the world’s best free cooking lesson.”

What the Hell is That?

You parking space is the final frontier in your tailgating experience. This is where your tailgate party lifts off or flops. So it’s important to have a focal point of your party space.

Or think of it this way: you know how at a house party everyone tends to gather in the kitchen? Same idea, only at a tailgate party it can be the grill. Or a table and lawn chairs. Or just the trunk of your car. Or, big idea person that you are, you can go over the top.

Cahn has some incredible stories of spaces he’s witnessed at tailgate parties over the years. Like the gentleman in Oregon with a mobile, stainless steel kitchen on hydraulics that sits at the center of the man’s tailgate party.

Then there’s the guy in Minnesota with a step van customized with a living room and working fire place. 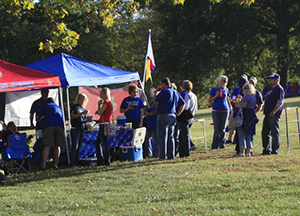 And Cahn tells of once seeing a landscape dump truck with the bed transformed into a party room including couches and beer kegs. But the dump truck’s true genius? To clean it out, the owner told Cahn, all he had to do was hit a button and the trash just tumbled out. Time to end the fun but some people won’t leave? Same thing, just hit the button. Party’s over, folks.

But in all Cahn’s travels, there is one extreme tailgating experience that stands out for him. It is, he says, hands down the most outrageous thing he’s ever seen in a stadium parking lot.

It was at a University of Southern California game, Cahn says. “This is Hollywood. This is Los Angeles. We see a Rolls Royce pull up into a parking spot near the stadium. So you know they’re a big contributor. But I’ve seen that before.”

At that point a man climbs out of the expensive automobile. “Don’t know if you call him a butler, a man servant,” Cahn says. “This was southern California so probably they call him a domestic engineer.”

The butler proceeds to set up and arrange an elegant table complete with table cloth, candelabra, fine China place settings and so on.

Then Cahn says, the butler “puts out a beautiful spread. Seafood, foie gras. Four people are eating at the table. I’ve seen that before.”

“But when the string quartet struck up the USC fight song…that I thought was a little over the top.”

For more tailgating tips or to follow the travels of Joe Cahn, the Commissioner of Tailgating, visit www.tailgating.com.