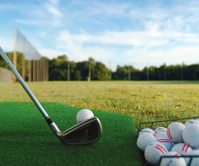 Impact is often referred to as the “Moment of truth”. Regardless of what occurs throughout the backswing and downswing the goal is to square the club face at impact while the club travels toward the target. The result is a straight shot. The following club positions are ideal at impact.

Shaft lean is the measurement of how far the hands are forward or backward at impact. An ideal impact position creates a forward shaft lean at impact while the hands are slightly in front of the club head. 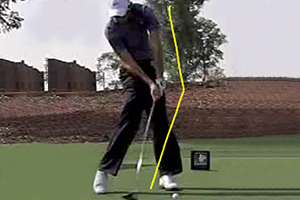 Forward shaft lean is necessary for the correct downward angle of attack and ball compression. Forward shaft lean strikes down through the ball causing the ball to lift in the air. Backward shaft lean is an indicator of several potential swing faults such as hanging back and scooping. When the shaft is backward at impact the result is often thin or topped golf shots. Shorter clubs will generally produce slightly more lean than longer clubs.

A fundamental impact position is the head behind the ball, flat left arm and wrist while the shaft leans forward at impact.

Club path is the direction the club head is moving at impact. The club head travels down the target line for a straight shot. The path helps determine the golf balls starting direction. Players that prefer a draw must produce an in-to-out path while a fade requires and out-to-in club path. 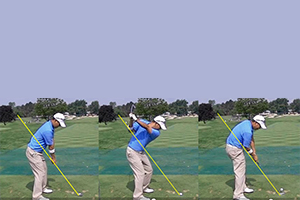 Note this professional golfer’s address shaft angle and impact shaft angle are nearly identical. This was Anthony Kim during his prime. We hope to see more of Anthony at some point and hope he makes it back to this kind of form.

– Matt Keller, PGA
Matt Keller is a PGA Golf Professional with over 15 years of experience. Matt is a graduate of the Penn State PGM Program. Throughout his career he has worked at courses in Pennsylvania, Maryland, Florida and Delaware. Matt has conducted thousands of golf lessons to players of all ages and ability levels. Currently, he is a PGA Professional at Cripple Creek Golf and Country Club located near Bethany Beach, DE.